Culture Night Belfast, part of the wider island of Ireland-wide celebration taking place annually on 21 September, is an event that I always make sure to attend, with my family,  regardless of the weather. Parking can be tricky, buses are full, the weather can go several ways, but it has always been worth the effort.

Sometimes, it’s a night of two halves – one part with the children, and the other half after they’ve gone home. Last year (2017), at the Belfast Print Workshop, we had a steady stream of visitors until we closed at 10pm. After clean-up, I left and strolled down Hill Street, I say ‘strolled’, it was more, and at the risk of sounding like an old fart, ‘battled’ through drunkards and smashed bottles – there wasn’t much culture to be seen. I heard comments the next day ‘What culture night?’, ‘Just a load of people getting drunk’, etc. and I disagreed. I knew it was because I’d only made it onto the streets after 10pm that I was seeing that side of Culture Night. I remembered from previous occasions my kids playing in Buoys Park with giant soft bricks, making colourful fish out of plastic drinks bottles and other junk. I remembered walking through the Vortex (all of us hanging on for dear life inside a spinning cylinder even though we weren’t moving) hundreds of people seated at a long table for a wonderful vegetarian meal, BMX stunts, drag queens, gallery studios, choir recitals, wrestling, roller derby, street art taken to a level I had never witnessed before (see Seedhead Arts and Hit the North), and more.

Our normal route, on Culture Night Belfast, is to stroll down North St and Donegall St and hang around Writers Square and Buoys Park. This year we Glider-ed (glid?) into town, taking in some music from the ‘World Stage’ at City Hall, dancing on Royal Avenue, the Irish Video Game Orchestra performing in the wonderful carcass of Riddels Warehouse (a real highlight) followed by flamenco music and dance on a windswept stage near John Kindness’ Big Fish. The fact that we had an equally enjoyable evening taking two totally routes and venues, highlights the sheer amount of activities taking place on one night and is a credit to Culture Night Belfast and indicative of how much it has grown in its ten year existence. After sending the kids home with my wife (we sometimes trade evenings off, OK?) I popped into the Fenderesky Gallery and Keats & Chapman, spotted a neighbour who I had no idea was a performer draped over a piano drawling some Tom Waits number in a street party, so far so good. Yet after that I experienced the same scene in the Cathedral Quarter as the year before, the smashed bottles and police keeping an eye on proceedings while the ‘culture’ was being loaded back onto the backs of trucks. I had thought that this side of Culture Night kicked off a couple of hours later (it was just after 9pm) – yet the following day another father attending with young children told me that the carry outs were already being downed at 7pm in Buoys Park, and that Bank Street had turned into a public urinal. The programme however reminds us that ‘Culture Night is not a ‘bring your own’ event and usual street drinking legislation applies’.

Which brings me to the programme… my Belfast Blog colleague Sophie had the impression that while the printed programme was great on logistics (areas, locations, events, etc.) she felt that there was a distinct lack of visibility for the cultural organisations providing the culture on Culture Night: no list of arts venues, no reminder that they were putting on events for free (incidentally, I couldn’t find any reference to all the volunteers helping out on the night). I looked again, it is true – while the programme gives the inside cover over to funders and sponsors, the bulk of the pamphlet lists the likes of Caffè Nero and Costa Coffee alongside The Grand Opera House, St. Anne’s Cathedral and The Mac, without any distinction. 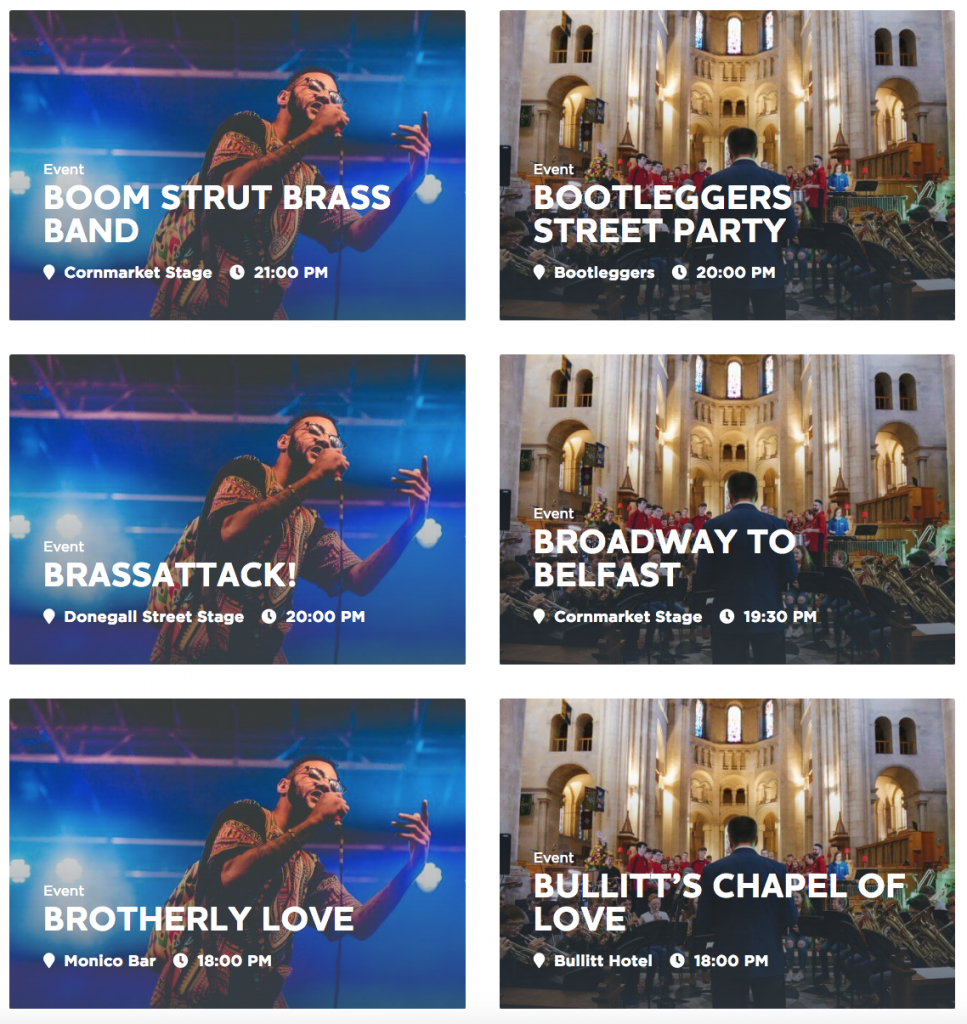 Screenshot from the Culture Night Belfast website – one photo fits all.

I also saw a worrying strand of ‘Oirish’-ness emerging: on Hill Street, a Father Ted evening; while Skipper Street (christened for the evening as O’Skipper Street) was full-on leprechaun themed – who is this aimed at? Power NI apparently put on a good light show but when I passed through Writers Square it consisted of a large Power NI logo projected onto the face of the St Anne’s Cathedral; and, to top it all off, the vacant lot beside the Black Box (nothing to do with the Black Box) housed two Lexus’s (Lex-i?)* under a canopy which obscured, and possibly drilled into, Conor Harrington’s mural ‘The Duel of Belfast, Dance by Candlelight’. I glid home.

In an attempt to temper my disappointment with the second half of the evening (and fully aware that one can only ever experience only a small percentage of the huge amount of activities that take place) over the weekend I had a look on Twitter to see what people were saying. I avoided looking at the people-I-follow bubble but looked instead at the #culturenightbelfast and #cnbx hashtags:

(I’ll try that again) – This marks the end of any soul that #CulturenightBelfast had.
A Lexus display on Hill Street, the least cultural thing I’ve seen in the Cathedral Quarter. And I’ve seen a lot. T’was nice #CNBX but your time has come. https://t.co/WrKc71nnzW

And the official response:

Just to clarify, this had nothing to do with Culture Night Belfast. This is a private carpark. We have no control over this space, the owner gave permission for this. We were more saddened than anyone to see this type of grim commercialisation of the event.

I found footage of the of the light show on St Anne’s Cathedral – looked fun and seemed to go down well with those that witnessed it and tweeted about it – but why soundtrack it with Pharrel Williams and Coldplay? Is there not a thriving Northern Ireland music scene that could be mined?

I have very mixed emotions about tonight’s #culturenightbelfast … karaoke with @grs_ni and hobbwywhores was ULTIMATE CRIAC – huge overwhelming, panic-attack inducing crowds across town was deffo NOT.

Seems to be a hitherto unseen phenomenon of Leprechaun hats at this year’s #CultureNightBelfast
Fuck off!

And lots of joy and positivity:

So I guess I’m left confused about the whole thing. I like the concept of Culture Night Belfast, as a showcase of the city’s creativity, and I bring my family every year because I want to instil in my children a little sense of civic pride despite a lack of government, despite the crippling and on-going cuts in arts funding, however, this year as it celebrates its 10th birthday, I think we need to think carefully about what Culture Night Belfast is, who it is for and where it goes from here. I’ll leave you with the Black Box and The Sunflower: 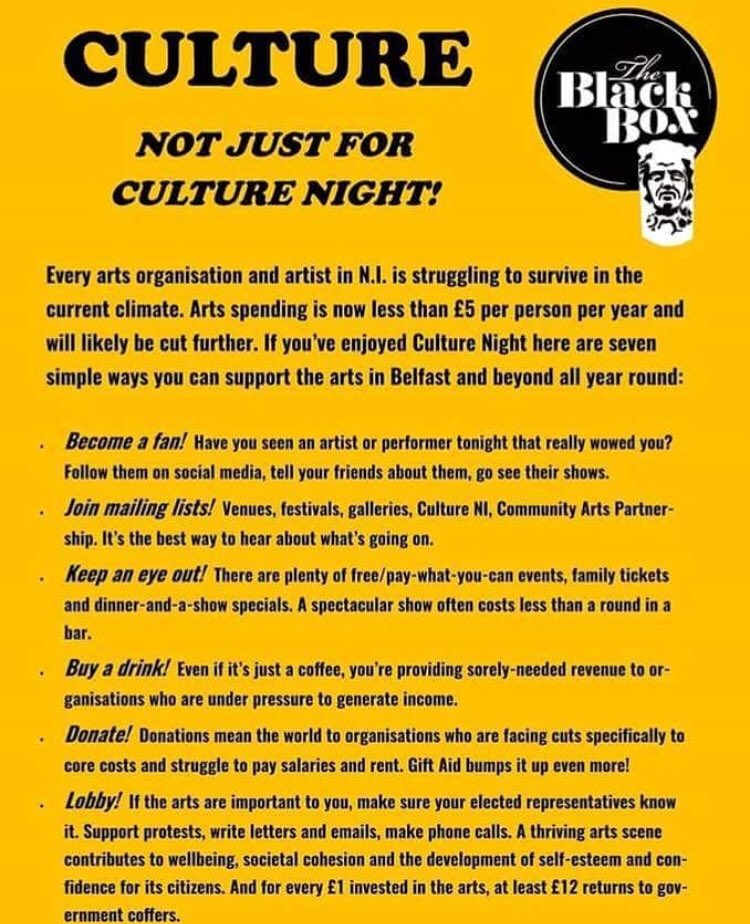